Come on an Advent journey and walk the rural roads and snow covered paths with Donna Frischknecht as she shares stories of God’s promises being fulfilled in the most amazing ways. These stories of “Emmanuel”—God with us—were gathered during her time serving as minister in a historic white clapboard church in upstate New York, right on the border of Vermont, from 2007-2013.

I had a lot of them at the little white church I served—men and women who after a storm would search the sky for the brilliant rays of red, orange, green, yellow and blue. 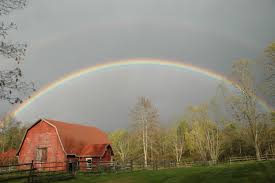 And once the rays were found, I would get text messages with pictures and comments such as, “God’s promises arching over us” or “God smiling down upon us.”

I’ll admit it. I became one of those “rainbow watchers.” I just couldn’t help it because the rainbows in that part of the country were some of the best ever.

Perhaps it was the vast expanse of hills and valleys all around us that made the rainbows seem closer to us than they really were. Or maybe the air was a bit cleaner as there was not that many cars giving off fumes or factories poisoning the air and so we could see God’s palette of colors even better.

Whatever it was, every time it stormed I, too, searched the skies for God’s message of hope to come after the storm was over.

One memorable rainbow came one summer evening. A vacation bible school meeting had just ended with more time taken than usual to pray for the children God would send to us. This time of prayer continued in the parking lot when a few of us, still lingering about, felt the Spirit move and so we prayed some more. (I believe we can never have enough prayer and, boy, was it a blessing to serve a community where impromptu church parking lot prayers happened more than the usual church parking lot squabbles in which churches are notoriously known for.)

So we prayed some more for God’s Spirit to pour out upon us so that we could be used as instruments for reaching the children in our midst.

On my drive home a storm had rolled in quickly and before I could even search the sky for a rainbow, the message alert on my phone dinged. There on my screen was a picture of not just one rainbow, but two rainbows, side-by-side, arching over what looked to be directly above our little white church.

The rainbow was also rare in the way that it was a complete bow, not just part of a bow. It was a leprechaun’s dream rainbow as it clearly had a beginning and an end that one could imagine led to that fabled pot of gold.

The message underneath the picture read, “Look at this, Pastor Donna! God’s reassurance that He has heard our prayers!” It certainly was a blessed reassurance that God was hearing us. And vacation bible school saw many kids attend and learn about Jesus.

Summer turned to fall and fall turned to winter and the rainbow sightings grew fewer and fewer as the season changed.

By the time Christmas approached I wasn’t gazing too much up at the sky searching for rainbows. After all, who finds them in the winter? I never did. No, there would no more rainbow reassurances from God in these wintery skies.

“But, God,” I whispered, “I could REALLY use some reassurance that you are here.”

It was December 21, 2012 and I had a huge weight on my shoulders. In three days I would be preaching about the gift of a Savior born to us and yet I just couldn’t get my mind off of the children who were killed just a week before in a school shooting in Connecticut.

What would I say about the holy night in which God came to us in flesh when lately it seemed as if God incarnate was as fabled as the leprechaun’s pot of gold at the end of a rainbow? In just three days I had to preach about hope born again in our lives.

And so on December 21 I was driving to the grocery store to pick up some items for the caroling dinner the little white church was hosting that night. I was feeling a bit stressed as I wasn’t able to wash my hair or have a hot cup of coffee or enjoy the lights on my Christmas tree because an early morning rainstorm blew through the area. In its path it left behind broken tree limbs and no electricity.

My attitude was not great at all. Not only could I not have a shower and a cup of coffee, I had wanted to write my Christmas Eve sermon, but I had, yet again, forgotten to charge my laptop and so I was even without that.

As I drove the winding road I noticed something beyond the valley arching over a quintessential New England red barn.

A rainbow? This time of year? So close to Christmas?

It was indeed. Its beautiful arches hovered over the land and the colors rivaled even the most precious of stones that I have held in my hands as a young jewelry editor in Manhattan.

I pulled the car over so that I could call my mom. I just had to share the news about this incredible rainbow!

My mom answered the phone but before I could even tell her the reason I was calling she rushed me off the phone with the quickest of explanations. At that very moment the rainbow appeared, my mom was watching on the TV the moment of silence and the ringing of the bells for the children and teachers killed a week before in Connecticut.

I hung up the phone and stared at the rainbow. I looked at the clock in the car. It was exactly the time in which the shooting took the lives of these innocent people, and now here before me was a sign of God’s reassurance that hope does come after the storms are over.

I had my Christmas Eve message:

Years ago God’s announcement of hope breaking into our lives came with the appearance of a brilliant star in the East. The star of Bethlehem, pointing brilliantly to the one who would bring light to our darkened world—pointing to the Christ Child.

I’ve always stared up at the sky on this holy night, wishing that I could somehow be granted a glimpse of such a sign of reassurance that God is still at work in our lives. And I know many of you are looking this day for such a sign. If only we could see that star or see something to know that all will be well.

But, my friends, God is still reassuring us that He has not become to deaf to our cries. Some of you saw that incredible rainbow three days ago. I saw it, too. But what you might not have realized is that rainbow appeared in the sky at the very moment our nation paused in silence to pray for and remember those lost in the evil that struck the school in Connecticut. For those who say God has forgotten us, I say, open your eyes and open your heart. Believe. For a rare Christmas rainbow appeared right before us—God’s reassurance that hope will always break through as it did this night so long ago. God is still speaking in the brilliance of a star, a cry of a newborn baby in a manger, in the songs of the angels, and, in a rare Christmas rainbow.

May you leave here tonight reassured you do not leave alone. God is with you, as promised.

I still find myself every now and then watching for rainbows after a storm. But what I look for even more are signs of God’s reassurances that I have learned come in the most unexpected ways—just like that rainbow days before Christmas.