Come on an Advent journey and walk the rural roads and snow covered paths with Donna Frischknecht as she shares stories of God’s promises being fulfilled in the most amazing ways. These stories of “Emmanuel”—God with us—were gathered during her time serving as minister in a historic white clapboard church in upstate New York, right on the border of Vermont, from 2007-2013.

Early in Advent the church had a tradition of hanging all the Christmas greenery as part of its worship service. Now I was a bit perplexed when I heard it was part of the actual service. How? When? Where? What? So many questions because I’ve never heard of such a thing before nor have I seen a church get “greened” right before my very eyes.

When I was a child the ivy and holly and poinsettias and Christmas tree always seemed to miraculously appear from one Sunday to the next. In my childlike awe, I just presumed it was Santa’s little elves at work making the church pretty for the season.

Those elves of my childhood seemed to be at work as well at the Fifth Avenue church I worshipped during my time living and working as an editor and reporter in Manhattan. One Sunday the doors were bare and the next, poof! Wreaths appeared from nowhere and greeted you with festive cheer.

Later on when I heeded God’s call to serve in the church, I realized the greening of a church did not involve the magic of Santa’s elves. Rather the decorating was more an adventure of getting volunteers to spare just a few minutes either on an weekday evening or a Sunday after worship to help get the church ready for Christmas. This feeble call for decorators was often helped by the promise of pizza afterwards. Food has a way of bringing out the volunteers.

“No, pastor, we really do decorate the entire church during the first hymn,” was the reply I got back from members of the worship committee when I asked for what might have been the twentieth time as to how this was all going to happen?

I guess my lack of comprehension was amusing for eventually the members of the little white church decided not explain to me anymore about how it would be done. Instead, they gave a knowing smile to one another and then a reassuring smile to me, their pastor, and said, “Don’t worry about a thing. Just wait and see.”

The Sunday came and the hymn to hang the greens by began to play. The tune was the familiar “Angels We Have Heard on High” but the words were completely foreign to me. The words, written many years ago by a member of the church, sang of the meaning behind the greens, talking of God’s love as everlasting—and as evergreen—as the swags being strung from the balconies that wrapped all around the early Colonial sanctuary.

The new verses to the familiar tune continued to be sung. I eventually stopped trying to sing for I just wanted to take in all the magic going on right before my very eyes.

On one side of the balcony there stood the testimony of time as father, son and now grandson stood together to be part of this beloved Christmas tradition. I stared at the three generations working together and realized there before me was a powerful illustration of what handing down the faith was all about—sharing the traditions, the stories and working to glorify God together, side by side. I looked at men and women who all of sudden stood up from their pew with evergreen in their hands ready to wrap the ancient pillars of the church. Even more people came up to where I was standing on the chancel and from behind the ornate wooden pulpit chairs, large wreaths appeared and were hung on either side of the chancel. 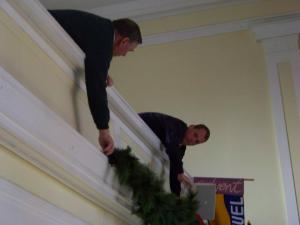 My husband, PJ, helps hang the greens from the balcony in the little white church the first Christmas we were married.

By the time the last verse was sung—or the first verse repeated if more time was needed to finish the greening—there was not a dry eye or the lack of a beaming smile coming from all in the sanctuary. Everyone looked at one another and at the beauty that surrounded them. Joy filled the air.

There before us, in the greening of the church, was the great Christmas message of how God breaks into our hearts with hope. There before us was the reminder that if God can transform a barren sanctuary into something glorious in just the singing of a song, imagine what God wants to do in our own lives? For one second we might be crying, we might be complaining, we might be walking in what seems to be a never-ending road of darkness, but then in a blink of an eye the promise of God’s everlasting love can—and will—appear. And here was the most important reminder seen in the hanging of the greens that took place as part of the worship service. God often breaks into our lives through the hearts and hands of others. God uses his beloved community to bring about miracles as small as making a little white church ready for Christmas to as big as making those in the world ready for Christ.

Thanks be to God.

Pass it along to friends!