It was my own fault. I mentioned in passing at a church gathering my desire to have chickens one day. I was after all living in God’s country, as the locals called it, and the endless fields and pastures all around awakened my inner country girl, inspiring me to get down and dirty with the land that was now becoming my home as well.

Yes, chickens would be fun, I thought. I do recall mentioning my desire for a goat or two as well, but luckily all that made its way into the back of my car one early summer morning were six chirping chicks placed lovingly into a cardboard box waiting for me, their new mom, to take them home.

There was, though, a slight problem. I didn’t have a home for them. I didn’t have the chance yet to build a coop nor did I have time to buy one, as this gift of chickens was indeed a surprise. There was no barn or shed or garage on my property either in which to settle these chicks into. It was then I understood my father’s insistence with each house I looked at to buy that it should have at least a garage. Oh well, nothing I can do now but to make the best with what I have. And so out came the box from the car and into the house the chicks went.

Once inside I moved as quickly as I could so the curious eyes of my two rambunctious kittens wouldn’t see the box. There was nothing I could do, however, to prevent their pink little noses from sniffing the air. They sniffed excitedly and as they sniffed the silent dinner bell rang in their brains. Chicken! Yum! I knew I had to get the chicks into a safe place—and quickly. With the big box in my arms, I stood there thinking. The basement was out of the question for the kittens loved exploring down there. They also loved running and playing all throughout the first floor rooms. The bedroom was out of the question for I just couldn’t bring myself to having chickens where I slept. (And yet I was bringing them into my home!)

The two playful kittens in which the baby chicks had to be hidden from.

Ah. The tiny bedroom upstairs that was now my makeshift office would work perfectly for the chicks. So up the stairs I ran, slamming the door behind me. I placed the box down on the floor and looked at these fuzzy balls of cuteness looking back at me. An overwhelming sense of responsibility washed over me. Their little lives were in my care. They cocked their heads to one side looking just as quizzically at me as I was looking at them. I wondered. Did they sense I had no idea what I was doing? Was fear gripping them just as much as it was gripping me? I had entered the uncharted territory of “farming” and I was clueless as to what to do next.

“Just wait till I tell my parents about this,” I thought as I placed a window screen over the cardboard box and strung a heat lamp overhead to keep the chicks cozy. I then ran to the feed store and got my new children some dinner and a water feeder.

It didn’t take long for everyone to settle down and settle in. I even invited the children of the church to name the chickens and each Sunday on the poster board with the title “Name Pastor Donna’s Chickens” names such as Barbeque, Abigail, Drumstick, Fuzzy and Spot (yes, Spot) appeared. 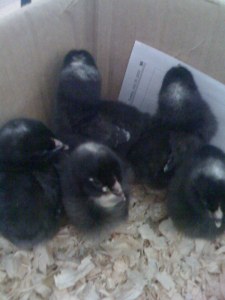 The fuzzy chicks the children from church named.

Weeks went by as I waited for the chicken coop to be delivered. Turns out I was part of a chicken farming trend and so there was a shortage of coops. But I didn’t mind. I found myself enjoying having chickens in my office. When I played the great old hymns of the church that were on my iPhone, they would gather together and move to the music. On days I would write my sermon, the chicks would stop what they were doing and sit quietly in their box as if to honor the silence needed for the creative juices to flow. And when I stopped the clicking of the computer keys, the chicks would begin chirping as if they were in some way trying to tell me what my next sentence should be.

Then it happened. The powerful God moment I never expected. One afternoon as the sun streamed into my little makeshift office now turned bedroom for the chicks, I opened the Bible to begin studying the scripture for Sunday’s sermon. For some reason my eyes didn’t gravitate to the assigned reading. Rather my eyes went straight to the creation story. I never was a huge fan of Adam and Eve and the Garden of Eden. Don’t misunderstand. God’s creation story is beautiful. It’s just that it never really captured my imagination nor was it ever a story that resonated with me. It was, for me, one of those over told stories we love sharing with children and that was it. But this day as my chicks gathered to the corner of the box trying to get closer to where I was, something happened.

The Lord God took the man and put him into the Garden of Eden to work it and take care of it…now the Lord God had formed out of the ground all the wild animals and all the birds in the sky. God brought them to the man to see what he would name them; and whatever the man called each living creature, that was its name.

I reread the Genesis account again…and again…and again. It was then the responsibility I felt for caring for the chickens and making them safe in my office till the coop arrived, went beyond just simply making sure the chicks survived the eagerly waiting grips of my kittens. The care of these chickens was symbolizing a greater care that I never truly understood before—the care of all of God’s creatures. Sure I had pets to take care of while I was growing up. But this was different. There in my office was a cardboard box holding vulnerable chicks. There in my office was God’s word being lived out. I was having an Adam moment for I felt this humble awe that I was given such responsibility without even first having knowledge of what to do. Someone trusted me with these chicks. Someone knew I could do it. I could care for them. God trusted Adam as well with the care of creation. God knew Adam could do it. Of course we know about the snafu with the serpent and the apple in the Garden of Eden that was to come, but let us not lose sight of the beautiful friendship and partnership God initially called us into. It is the same friendship and partnership with God is always calling us into for God knows we can indeed be responsible, loving parents to all creatures here below. And yet how many times do we even give a chicken…a rabbit…a snake…a worm…any living creature…any thought or care?

The time soon came for the chickens to leave my office, which was a good thing I guess as I soon discovered baby chicks emit a dust-like dander when they begin getting their feathers. When I mentioned this strange “dust” in my office at home and innocently wondered out loud if it might be coming from my chickens, I was quickly informed by a loving congregant, “What?! You can’t have chickens in your office!”

Oh, but I can. And I did. And by doing so I experienced an Adam moment that will forever be with me. I experienced caring for God’s creation in the most unheard way ever.

I had chickens in my office.

Pass it along to friends!